The Psychology of Serial Killers

The debate of nature versus nurture is an ageless debate among the psychological community. Is it one or the other? Or, is it a mixture of the two? “Theories that base their understanding of human behavior on "nature," focus on characteristics that we are born with, like our genetic make-up, stable personality traits, and physical predispositions.” (Hartney, 2010). Nurture is quite the opposite. People on the side of nurture are of the opinion that it is the environment that determines who a person is and becomes. Nature and nurture can be studied in various ways on many different types of people. The extreme classification though is when these theories are applied to a group of people who are hard to examine at best. Serial killers, for example, are so complex that the nature vs. nurture debate seems to have just gravitated towards them in the hopes of answering the age old question; do they kill because of nature or because of nurture?

Watch the video and be ready to answer the questions below:


1. What is said to be the main motivation of serial killers as defined by an encyclopedia?
2. What do all the serial killers have in common? How they differentiate from other criminals?
3. How does David Berkowitz accounts for his actions? How his childhood was different from a childhood of other children?
4. How does John Huse explain his behavior?
5. How does Aileen Wuornos feel on the day before her execution? Who or what does she blame for becoming a serial killer?   Does she feel any pains of remorse?
6. To what do people attribute John Wayne Gacy’s inclination to murders?
7. What disorders did Arthur Shawcross was diagnosed with? What was he sentenced to?
8. What was Tommy Sells’ penalty? How did he feel during murders?
9. How does Tom Bundy different from other serial killers? What drove Bundy into committing murders?
10. How are all serial killers classified by FBI?
Posted by Lovely Lana at 02:06 No comments:

Throughout the history of mankind, philosophers, scientists, academics, artists, musicians, writers have been speculating on this question but somehow the answer to it still haven't been found. What makes answering this question so difficult? Can you come up with an answer?

Click on the image below to watch the video and then do the follow-up tasks. 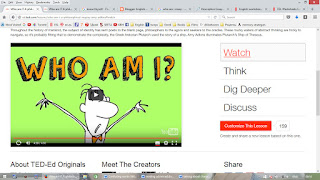 Tune into FCE Use of English

How many times have we had to deal with those last lessons before the end of a term when our students, anticipating holidays, can’t perceive any new information (who can blame them?) but there’s still a lot of material to be revised from course- and grammar- and skills books and past papers?  More than once, I bet. Apparently, almost every teacher has a number of enjoyable activities to help recapture students’ attention and bring them back to the learning process.  Using popular song lyrics is one of mine.

A lot has been said about the advantages of using songs in EFL, the most obvious of which are the authenticity of the language, a wide range of vocabulary and accents, an easy access to lyrics and songs themselves for the teacher, the opportunity to introduce or revise grammar patterns, to teach cultural phenomena, to initiate a discussion. As Harmer put it “it can make a satisfactory connection between the world of leisure and the world of learning.” (Harmer, The Practice of English Language Teaching, p. 242)
It’s worth mentioning that using songs in class helps a teacher to build a rapport with the students. One of my teenage students used to say that “if a teacher listens to this song (take any popular song), he/she must be really cool”, which might make it easier to deal with even unruly students and possibly win their respect.

Aware though as we, Greek teachers, may be of the benefits of using songs in class, we don’t have the luxury of using them on a regular basis (as we all have course- and grammar books “to finish” and past papers in exam classes) and we are extremely pressed for time.  Nevertheless, there are certain occasions (the end of a term, the end of an extra-hour lesson taken place on Saturday or late at night, the last 30 minutes of a “difficult” lesson) on which it’s excusable to deviate from the course books, enjoy our favourite songs and at the same time still have our students practice for the exam.

Why not turn the lyrics of our favourite songs into exam-based exercises, i.e. into four parts of the Use of English, FCE exam, namely a multiple-choice exercise, an open cloze, an exercise with derivatives and transformation exercise, and deal with the lyrics as text first, using listening stage for checking the answers.  Does it make any difference to using a past paper exercise? It does, especially as far as the first three parts of the exam are concerned. Besides the apparent reasons, mentioned above, such texts, which are actually lyrics, arouse interest among students, making them read the texts through before choosing the correct answer or guessing the correct word.  In most cases, as we all know, students deal with the task on a sentence level rather than on a text level, which causes numerous inevitable mistakes. It’s the understanding of the text as a whole that makes it possible to succeed in the Use of English part of the FCE exam. “In the absence of any global understanding of the text, post-reading tasks may well be a waste of time.” (Thornbury, 2005:54).

Unlike most texts in past papers, songs directly appeal to the reader’s feelings and emotions. As a vast majority of FCE students in Greece are young people, they are keen to read about eternal values like parents/children relations, love, friendship, breakup, getting over difficulties, first date, etc. Such texts evoke a strong emotional response with students and arouse their interest, making the process of preparing for the exam more effective and enjoyable.

When choosing a song, it’s advisable not to get carried away by the music but deal with the lyrics first and make sure there is a recognizable topic in the song, which allows students to get the grasp of the main idea of the text. Although it can be rather daunting to find suitable lyrics, for example, full of derivatives, tested in FCE level, you could easily use different tasks in one song.

Song lyrics can be a powerful (apart from being a very pleasant) tool for preparing students for ESL exams as long as the content of the song we chose to use clearly makes sense.  After trying out some of the songs-exercises with your students, they might get interested in making such exercises themselves – they take a song they like and make part 1, 2 (the easiest parts to make) and then distribute their songs among each other. Making their own tests familiarizes students with the format of the exam and, more importantly, provides them with a better understanding of lexical and grammar items examined at B2 level.

Listen to songs, get your students involved and… good luck with the results!

The worksheets I made help my FCE students deal with exam-based exercises can be found under the labels songs, exam-based.
Posted by Lovely Lana at 14:11 No comments:

Wake Me Up - AVICII (transformation exercises)

A beautiful song made in the format of transformation exercises. 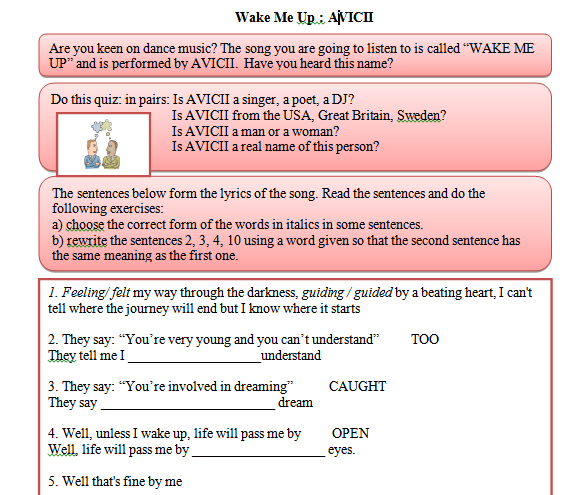 A lovely song, whose lyrics I turned into part 3 of FCE Use of English to help my students revise derivatives. 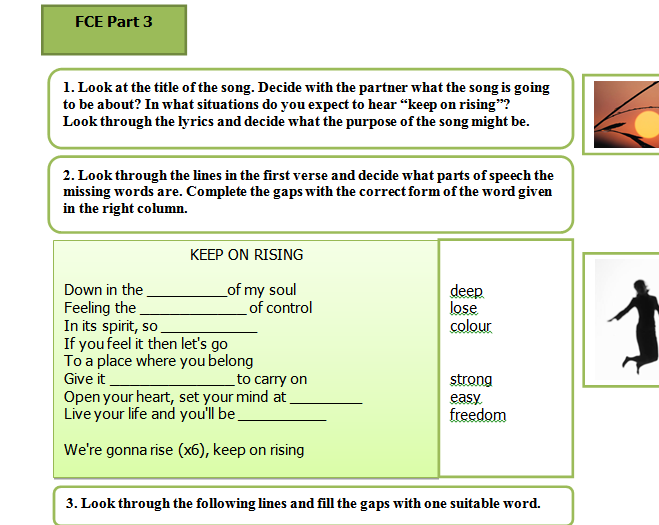 The lyrics from this rock song are turned into an open cloze exercise. 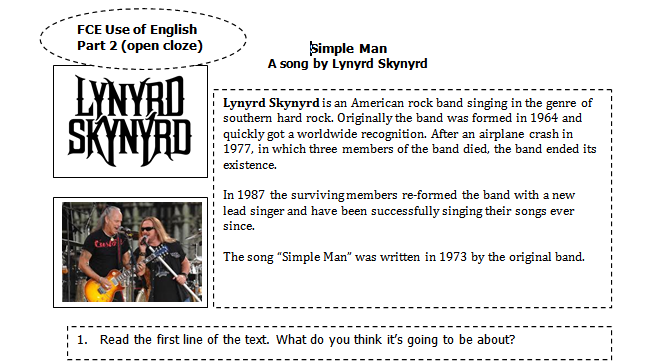 You can download this file here.
Posted by Lovely Lana at 12:01 No comments: 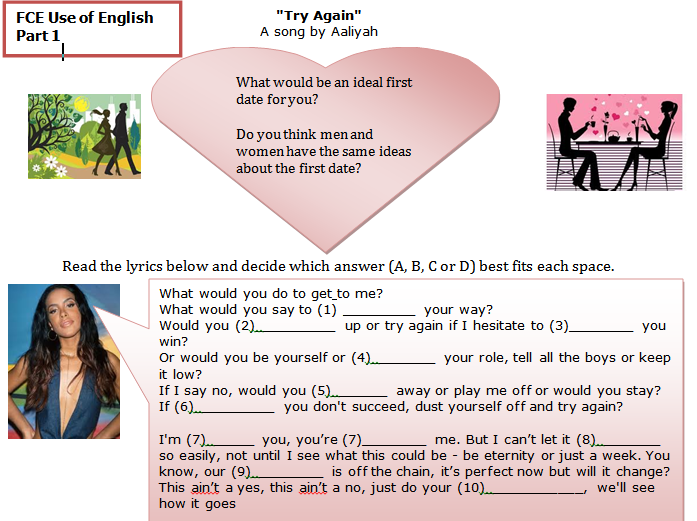